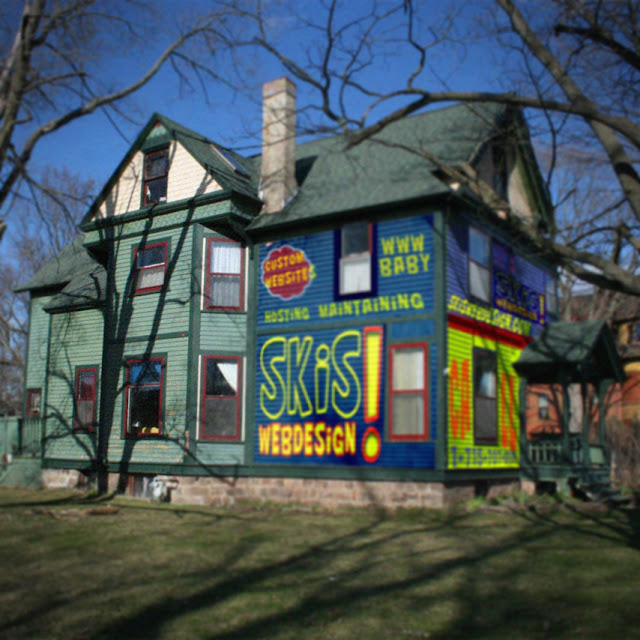 ^Impression of an Adzookie House


‘The colours of marbles must relate as much as possible to the character of the subject. It would be equally as absurd to use marbles in green, red, yellow or any other brilliant colour for a mausoleum as it would be to use black marble on an altar’.
- Abbe Laugier, Essai sur l'Architecture, 1753.

With this statement, French architectural theorist Abbe Laugier issued a call for honesty in his influential treatise. ‘The artist must be able to justify by reasons everything that he does’, preached the Jesuit priest. It was a sticky doctrine that continues to feed off of architects’ anxieties today, particularly when it comes to colour. One could speculate that the colour-drought of the past decades, evidenced by the monochromatic tones of glass, concrete and steel, is a consequence of our earnest search for honesty; honesty as it relates to the technology available to us and to our ideals of transparency.

Then, in 2011 Godialing presented us with the most distilled form of honesty yet. The California-based advertising company offered to pay 10 homeowners’ monthly mortgage in exchange for having their houses painted with advertisements.

‘We’re looking for houses to paint. In fact, paint is an understatement. We’re looking for homes to turn into bill­boards. In exchange, we›ll pay your mortgage every month for as long as your house remains painted’.
- Godialing (formerly Adzookie), 2011

Additionally, after a year, or whenever the owner decides they’ve had enough, the company re-paints the house back to its original colour free of charge. By late afternoon on its first day the ad received 1000 applica­tions, including one from a church. At the time of writing there have been 33,000 applications and counting.

If we were to apply Laugier’s ideals here, the ‘character’ of a bankrupt home is justifiably expressed in the crude tones of Facebook-blue and Braniacs-green. Do these colours relate to the character of the subject? Yes. But it’s a difficult pill for architects to swallow. We want so badly to be honest but the as the threat of foreclosure continues to creep, relentlessly, through America, England, Greece and Spain, the image of discordant symphonies of colours bearing no relationship to one another or to the form on which they are painted terrifies us.

So we ask, do unpleasant truths such as the mortgage crisis qualify as an appropriate driver for the way we colour our neighbourhoods, or are there boundaries to honesty?
The wonderful thing about colour is its capacity to tell stories. We want to choose our colours based on our own definitions of honesty that express what we opinionated people want to say. There is no room for story-telling in the Godialing model; the story has already been told, painfully stripped of all subjectivity. Like highlighters marking all the houses that should not, in a perfect economic model, exist, the colours signal a broken system.

But is that which is not honest automatically a lie? This is where the importance of the word ‘character’ comes in. Although Laugier illustrated his belief with an example intrinsic to his understanding of colour, he chose a word that seeks specificity yet leaves enough room for interpretation, for the character of a thing can appear differently to different people. Just as red to me can mean green to you, through our quest for honesty we can (and should, now that Adzookie has shown us what honesty can look like) continue to use colour to tell our individual stories.

Post by Dalia Hamati
Posted by Adam Nathaniel Furman at 10:38