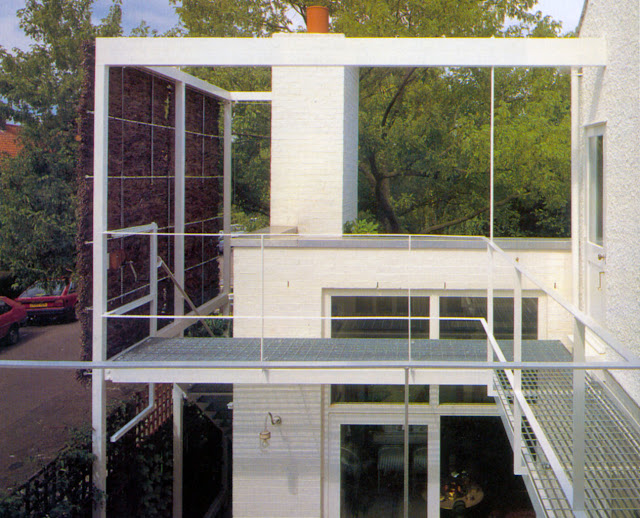 In England colour is used to accentuate elements very intensely and randomly, but in India, where I was born, whole surfaces are coloured, and gradually the colour fades and peels off, in the monsoon and the hot sun. I’m used to both sides and so I’m not frightened of colour. I can use it in quite a garish way or quite carefully. Because my work is quite planar, colour can be used almost symbolically to give a piece a certain place and importance, or to make distinctions between materials, so that you get a tactile and aural distinction as well as visual. Sometimes materials are used for their intrinsic colour – copper which becomes patinated, steel left to go rusty, mill-finished aluminium or fibreglass. You make discoveries, take chances and the project becomes something else as a result.

With the White House, white was given in the name. Everything was painted white except the hallway which was yellow, containing the stair. Lit only from above, it was like a tower at the centre of the house. Then there was the green garden. In the new project the garden became an outside chamber and the only new applied colour was the grey-green of the window frame and lintel, which was to do with symbolising, not dissolving, the connection between the two spaces: the most potent connection in the house.

In the end, the whole point was the quality of the light on the white of the walls and ceilings. The various openings were designed to open the house up in different directions – north, to the garden, west to the courtyard. Tinted light from the garden reflected green on the walls. Warm orange light came from the south and west. So from the kitchen at the heart you perceive all the different spaces and the actual colour was never white, because it was always reflecting and vibrating with other colours, activated by the light.

“Colour: the sensation produced by waves of decomposed light upon the optic nerve.” (Concise English Dictionary)

Post by Pierre d'Avoine
this text was originally written for Colour and Architecture, an exhibition curated by Clare Melhuish at the Heinz Gallery in 1993, which set out to reveal the nuances of colour usage in contemporary buildings designed by a range of architects from different countries, and different climates, around the world.  The exhibition was designed by Pierre d'Avoine, and included his scheme for the White House.  In this text, he explained how the prevalence of white surfaces provided the means of orchestrating a rich but subtle array of coloured hues.

Posted by Adam Nathaniel Furman at 09:48