What is Architectural Colour? 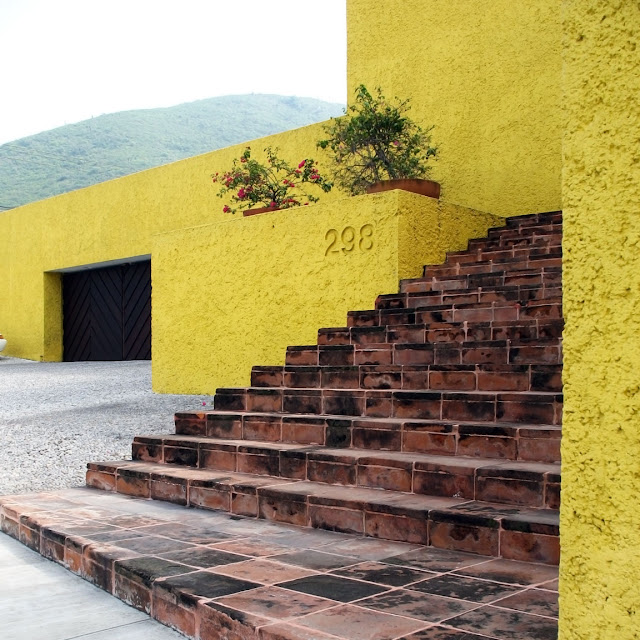 The following article by Peter Wilson, Director of Bolles & Wilson Architects, is a review of Fiona McLachlan's book "Architectural Colour in the Professional Palette", published by Routledge.

Who might the audience be for a book called 'Architectural Colour in the Professional Palette'? In the opening pages Fiona McLachlan tells us that this book is a tool for professionals. One suspects this may well be a market identified by the publishers Routledge. In presenting a broad sweep of recent and already much published polychromatic buildings it is insistently neoteric, more likely to appeal to students wanting to make a speed start on current architectural modes.  The poor practitioner looking for a colour for a current job might not make his or her deadline with this book in hand. It is a question of format, a question Le Corbusier well understood in marketing his pre-selected colour Keyboards for the wallpaper manufacturer Salubra. I am fingering the full-page matt swaths now while writing and I must confess salivating. Colour is an emotional issue, one that engages both physiological and sensual encodings of memory and atmosphere. This is perhaps why colour theory is so difficult to swallow. Having gagged on both Goethe and Itten, my favourite appetizer is Joseph Albers 'Interaction of Colour', printed in black and white with only a few full-page colour fields (glosssy like the Routledge publication, not good for fingering).

For the student or the diligent practitioner Fiona McLachlan's book is dense with informative reference,  Pugin, Ruskin or Semper co-habitating here harmoniously with those who rejected their eclecticism, Bauhaus theory  (Itten and Albers) or non-objectivists (Barnett Newman, Rothko, Bridget Riley). Curiously almost all colour theory seems to emanate from middle European sources.  A particular contemporary strain of Anglo-Germanic propping underpins the first of the eight exemplary practices scanned in these pages. Much of Caruso StJohn's kudos derives from their belonging to the Semper camp. But who was Gottfried Semper? And what tools do we need to revive such mid-nineteenth century debates? Unfortunately Fiona Mclachlan's book does not take us deep into the controversy of Semper's 1834 `Preliminary Remarks on Polychrome Architecture and Sculpture in Antiquity' nor into his theory of Wandbekleidung (Wall Clothing) - legitimizing the autonomy of the facade from tectonic or formal issues (a reference long championed by Adam Caruso's ETH professorial predecessor, HansKolhoff).

Architectural Colour might not be a handbook, but it is certainly a map of the author's role models. A few examples of her own polychromic work stand well in their proximity. The texts read like eight mini-monographs: the architectural horizon seen from an Anglo Saxon perspective in the opening years of the 21st century. One can only agree with this canonization of O'Donnel + Tuomey or Gigon/Guyer, but curiously we have to wait to almost the end of the book for the high priests of polychromy, Sauerbruch Hutton, who unlike many of the others, bite the bullet and choose their own colours, 'Delicious'- as Louisa Hutton describes her hues, 'anti-decorative' as Kurt Forster might add. Little play is made of Sauerbruch Hutton's Indian epiphany nor of other characters that colour the British architectural scene. I am thinking here of Richard Rogers partner Mike Davis, colour coded Red since the 1960's, a gift for a colour theorist, or JimStirling who John Tuomey once reported had a wardrobe full of his signature tent size blue shirts. The Mexican Louis Barragan whom Fiona McLachlan  describes as a South American architect, is inexplicably underplayed. It was Barragan's pinks and yellows that Anni Albers (wife of Joseph) introduced to MOMA, instigating a sensuous erosion of functionalism, a significant paradigm shift on a not-that-distant architectural horizon.

We are informed in the text that 'modern paint dries quickly due to the alkyd used in the resin, but is more brittle and can crack over time', hopefully this will not also be the fate of this book which records where we were at in 2012. Taking in a larger timescale of colour theory we would expect to encounter what Stephen Holl wants to activate, 'the metaphysical properties of colour and light', which would lead us in the direction of Merleau-Ponty asserting that 'colour is a modality of the enveloping presence of the sensory field'. A possible explanation for Fiona McLachlan's enigmatic sentence, 'Hermeneutic theory suggests that the design process is imbued throughout with interpretation' - an invitation either to glance in the direction of the German philosopher Hans Georg Gadamer, or a door opening to a long forgotten emblematic status of colour: Red signalling the dignity of Mars, Blue the piety and sincerity of Jupiter, green the felicity and pleasure of Venus.

Admirable as this book is, it is limited by the ability of language to evoke vivid experiential phenomena, an archaic art which the geisha Sei Shonagon mastered around 1000 AD in her Pillow Book; 'for undergarments in summer I like violet and white..... I also like clothing of brilliant silk and garments that are white on one side and sombre red on the back....  for fans with yellow paper I like a red frame and for fans with violet/purple paper I like a green frame... for women's cloaks I like bright colours, the colour of a vine, a cherry tint, a plumb-tree red shade ...  all bright colours are pretty.'

Posted by Adam Nathaniel Furman at 11:38