Cosmetics, Colour, and the Rhetoric of Deception and Truth

^Murals in Santa Marta, Rio, that use Supergraphical techniques pioneered in the military and advertising to frame public space, and cohere civic pride at an urban scale, in an economical manner, for a rapidly advancing neighbourhood. (source)

The following is an extract from Jacqueline Lichtenstein's masterful look into, and unpicking of, discourse's traditionally wary view of any art form which harnesses the power of sensually affective delivery to communicate meaning, and persuade an audience. From Rhetoric in the age of Cicero, which was a perpetually suspect, but fundamental weapon in the orator's arsenal, stirring up audience’s animal emotions with speeches operating through pathos, empathy and bathetic leaps, rather than pure reasoning, logic and argument; to Painting in Enlightenment France, where camps were split between those who believed art should use all its powers of colour and illusion to present the viewer with a direct experience of flesh and event, and those who, aligned with Poussin, found such techniques dangerous, uncoordinated, arousing of unedifying instinctual responses, and so instead pushed for a certain intellectual distance to be cultivated between the observer and the content of the painting, for all elements from facial expression to colour and context to be as highly codified as words in a language, allowing the paintings to be read and understood at a remove, rather than experienced and  felt in the instantaneous flush of encounter; from these periods whose dialogics she unravels so elegantly, we can draw lines directly to today, where the potency and power of works of architecture and art that operate on human experience directly, through the senses, via our irrational and instinctual, pre-linguistic response mechanisms, are still suspect, whose liberating and radical ends are all too often confused by means that happen to also be used to devastating effect by the flatness of consumer culture. It may be a clear and relatively easy way to signal one's seriousness and aloofness by presenting ideas and work in dour, colourless, prolix and difficult to penetrate ways, but it is also to neutralise the very potential that those ideas might have by effectively sabotaging their delivery, castrating their possible fecundity at the very moment they are released into the world. Delivery is everything.

Extract from 'The Eloquence of Color: Rhetoric and Painting in the French Classical Age'
Jacqueline Lichtenstein 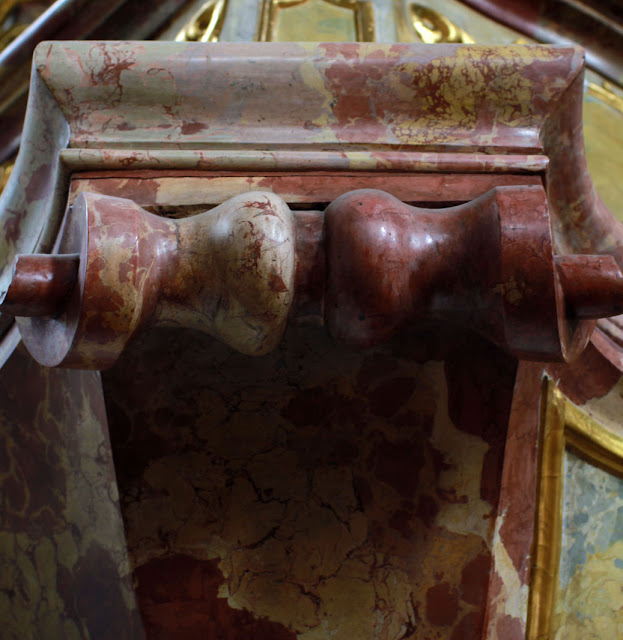 ^Scagliola scroll in a Bavarian Baroque church. This technique of imitation stone in plaster, glue and pigment achieved such vivid and hyper-real effects that it was more popular than real marble, despite being significantly more expensive. It was better at doing its job, more eloquent, than that which it was meant to represent... despite -or rather because of- being pure pigment.


"Ornament may be necessary to Beauty, but too much ornament ruins nature and truth. Thus we might sum up an aesthetics that dominates throughout the Middle Ages and to the Classical Age, and from which our discourse has never really departed. This principle, as we recall, implies a distinction essential to all metaphysical aesthetics, which allow the separation of the wheat from the tares, the distinction of ornament from make-up. Used to excess, ornament becomes makeup and dissimulates the truth instead of bringing it to light. This rule applies to discourse as well as painting. In the first case, it concerns the din of words, indulgence in metaphors, and overabundance of tropes, accused of masking things and obscuring the purity of the idea. In the other, it has as its target the brilliance of colours that are criticized for hiding the figure, for burying  the drawing and corrupting its effectiveness.
Metaphysics has always taught the secrets of cosmetics that apply indiscriminately to language, the image and the face. The same knowledge offers a delicate way to highlight the structure of a face by thinning the eyebrows, defining the mouth, shading the eyelids, or hollowing the cheeks; the subtle ability to shade a concept, underline an idea, illuminate an opposition; or the skill to tone down a line or a colour in a drawing. In each case, the prescription is the same: ornament must not be seen but must make its object visible, it must show without showing itself. The difficult techniques of makeup clearly confirm the ancient saying that art must always remain invisible. If a faint shadow transforms and eye into a glance and thus marks the passage from insignificance to existence, makeup that is too lavish, by contrast, takes on the unreality of a mask.

The constant warning against the dangers of artifice whose effect is not self-effacing, the continual distrust of ornament that shows itself as such instead of hiding, attests to a fear that tradition consistently upholds. It is a profoundly ambiguous fear, expressing the simultaneous and conflicting fear of being deceived and desire to be deceived. For artifice, accuse of trapping the subject in a web of culpable seduction and illicit pleasure, is also asked not to display itself or reveal its own procedure. If artifice indeed deceives, then art is obliged to be doubly deceptive, as if the victim’s ignorance legitimated the artifice and art shed its guilt at the very moment that it became a lie rather than a simple ornament. Perhaps aesthetic pleasure is philosophically acceptable only if it is born, not of seduction, but dupery.

Most of the difficulties raised by the question of artifice, indeed, stem from the fact that it always conflates two very different problems: that of deception, which concerns the objective and perceptible effects of artifices, and that of the deceiver, which has to do with the moral investigation of intentions. The analysis of art’s effects falls back onto that of the ends that the artist sets for himself in artistic creation. Such an operation tends to omit the aesthetic question proper, since it uses psychological and moral categories that apply to the subject-painter to interpret the object-painting. On the contrary, in distinguishing the artist’s sincerity from art’s deceptions, Roger de Piles shows his intent to dissociate the two perspectives. When he defines the essence of painting as deception, this notion has no moral implications. It does not claim to judge an intentionality but a perceptible effect. The psychological analysis to which it refers does not involve the relations between artist and art but those between a painting and its viewer. The fact that art depends on artifice does not warrant the conclusion that its character is more deceptive.

Paradoxically, a purely aesthetic position like that of Roger de Piles is the only one that can avoid moral criticism, since its asks artifice to show itself, that is, to show how it deceives. But we have already encountered this paradox in the analysis of rhetorical representation. To throw the accusation of deception back onto philosophers, Quintillian had only to show that eloquent discourse, based on effects alone, was never deceptive, unlike philosophical discourse that claimed to be the discourse of truth. Roger de Piles’ procedure for turning all the prudish critiques of the artifice of coloris back onto their authors is analogous. He affirms that artifice in painting is not deceptive, since it presents itself to the eye as an object of delectation. It is not a deception but an effect of deception that the viewer enjoys only if the deceptive effect dissolves as soon as it acts on him. In this sense the aesthetic experience, unlike the image often given of it, is inseparable from the movement of reflexivity that characterizes consciousness. It demands an instantaneous reflexivity and an especially sharp wit, since conscious processing must occur at the same instant that the perceiving subject vacillates. Here, the reflexive distance implies not detachment from the object but rather recognition of its seductive charms; the gaze no sooner recovers from its surprise than it delights in the object that has captivated it. Critics accuse painting of being a deception on the pretext that it is only an appearance. But this is precisely the point: it is but an appearance of deception, a lie that deceives only the naïve who do not know how, or do not like, to look; a deception that does not really deceive, since it shows itself. On the contrary, when artifice hides, then it becomes truly deceptive in the moral sense of the term –a blatant falsehood.

Such is the paradox underlying most discourses that set forth rules in the art of cosmetics. They use a logic of truth whose ultimate reference and sole criterion is nature. Naturalist thought, by refusing to grant the pleasures of artifice the slightest legitimacy, forces artifice to disguise itself as nature… Nietzsche says that art’s illusions, unlike those of science, philosophy or religion, are not lies because they do not try to pass for truths but present themselves simply as what they are…To ask art to hide itself obliges art, in a sense, to pay homage to nature. A referential logic of truth thus replaces an aesthetic approach to seduction. And his obliges art to become what metaphysics has always claimed it was: a deception of the subject, a lie about reality."

Posted by Adam Nathaniel Furman at 04:20